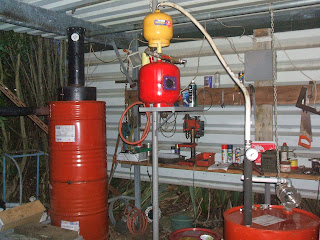 23Sept2013 Here is what the miniature refinery site looks like at close to the point of completion. After numerous delays, the testing will commence shortly.
With a few little jobs to do, I'll do a maiden run as soon as the basics are in place. Naturally there'll be things to tweak, improve and modify. There's 20liters of waste oil in the retort ready for cracking.
Probably the continuous feed pump and the centrifuge will come later, once the retort basics are sorted.

24Sept2013
The heat exchanger is ready to pick up tomorrow!

3Oct2013
I processed about 5 - 10liters today to give the retort a trial. Getting the temperature up was slow but once gas was being produced, it lifted much quicker. Several things need tweaking and sorting.
The Arduino required reset a few times plus the PC locked up. Initial firing set up was needs revision.

4Oct2013 I got most of the list done today so am going to rerun tomorrow. The turk inlet gets a major work over. Pics up shortly on the appropriate page.

7Oct2013 The retort has made about 80 liters in a series of test runs. The reflux seemed to benefit from lagging to keep the heat up to my target of 300*C. The PC is still locking up but I discovered the likely reason to be Java. Xp task manager reports it using 98% cpu. Heat management was by manual control. The sight glass viewing port is a Godsend. The bubbler view ports clouded over to very opaque. I learnt a lot about retort behavior. Next trials will be in a couple of weeks' time.

20Oct2013 Upgrades in progress
1/. Feedstock and diesel vessels with marked increments for quantity.
2/. Heated fuel feed for the turk.
3/. Solve the software issues re PID servo.
4/. Bubbler sight glass.
5/. Repositioning the gas feed for the turk.
Posted by Excalibur at 7:04 PM