I ran the Orion diesel making machine after a lengthy refitting. A number of refinements were commissioned including brick refractory, revised retort weighing mechanism, I.D. (induced draft)fan and preheater.


240 liters of .848SG was made during actual production time of about 8 hours. Feedstock was a variety of waste mineral oils.


There was number of problems:
The reflux vessel had some leaks which were fixed.
Extra retort insulation was added and it was noted there was 60+ degrees of difference between lower and upper TC sensor probes.
The feed pump struggled, the cause discovered the following day as a kinked hose.


Improved feedstock quality put an end to previous boil-over episodes. Throughout the 8 hour production, amber diesel never ceased to flow through the sight glass, albeit at varying rate.


The run highlighted some useful information.
High flame temperature was needed so more insulation is required on the retort vessel.


The preheater can get really hot with temperature of 400°C+ noted. More insulation would benefit efficiency. Hot feedstock was optionally be piped back to the in-tank allowing heating of the vessel and separation of suspended water.


The production rate at low retort levels has some good things going for it. It requires less heat to evaporate and runs at a good speed. Sadly the failing feedstock pump didn't allow proper testing.
Next run I'll start with little or no feedstock in the retort then begin to add enough to suit the applied temperature. Ultimately I hope to adjust feed flow to raise/lower retort target temperature.


The retort weighing device worked much better than previous iterations. With reasonable accuracy I could determine empty-to-full status. Later refinements could include a strain gauge with LCD readout, alarms and programmed automation of pumps and valves.


It appears that the refractory bricks require a lot of warming up but they are impervious to direct flame heat. In addition these dense bricks are heat stores/conductors but poor insulators.


Various pipe threads throughout the plant (except retort/reflux zone) were sealed with automotive exhaust cement. This worked well so I'll be carefully evaluating.


Pics of the various modifications to follow, see appropriate pages of this blog..


Upgrades before next run could include: heat recovery, insulation, preheater. Also I'm pondering on making an operator checklist to ensure vital components like valves are correctly set.
Posted by Excalibur at 7:34 PM 4 comments:

It was back to the drawing board with a major revision after the refractory failure. Refractory kiln bricks and calcium aluminate castable cement for the difficult areas was chosen. The bricks were cut to shape then dry stacked so they hold each other in place. The flame inlet is round 3.5 inch heavy gauge steel pipe with a coolant jacket. Castable cement was used to form and adapt the difficult shapes.
The turk burner head has been moved away a few hundred millimeters. Some loose bricks were stacked on the firebox floor to create a torturous flame path. The object is to soften the ferocity of the flame so making the retort temperature more stable. A test run firing without the retort vessel in place looked great. See pic.
As I write the retort is in position but there is much work to do. The firebox upper needs fabricating. The reflux needs packing/trays. The new retort weighing mechanism needs testing. The injector pump drive motor requires bearings. The induced daft fan needs a cover. Revisions to the preheater plumbing. Instrumentation cabling/ adapting. 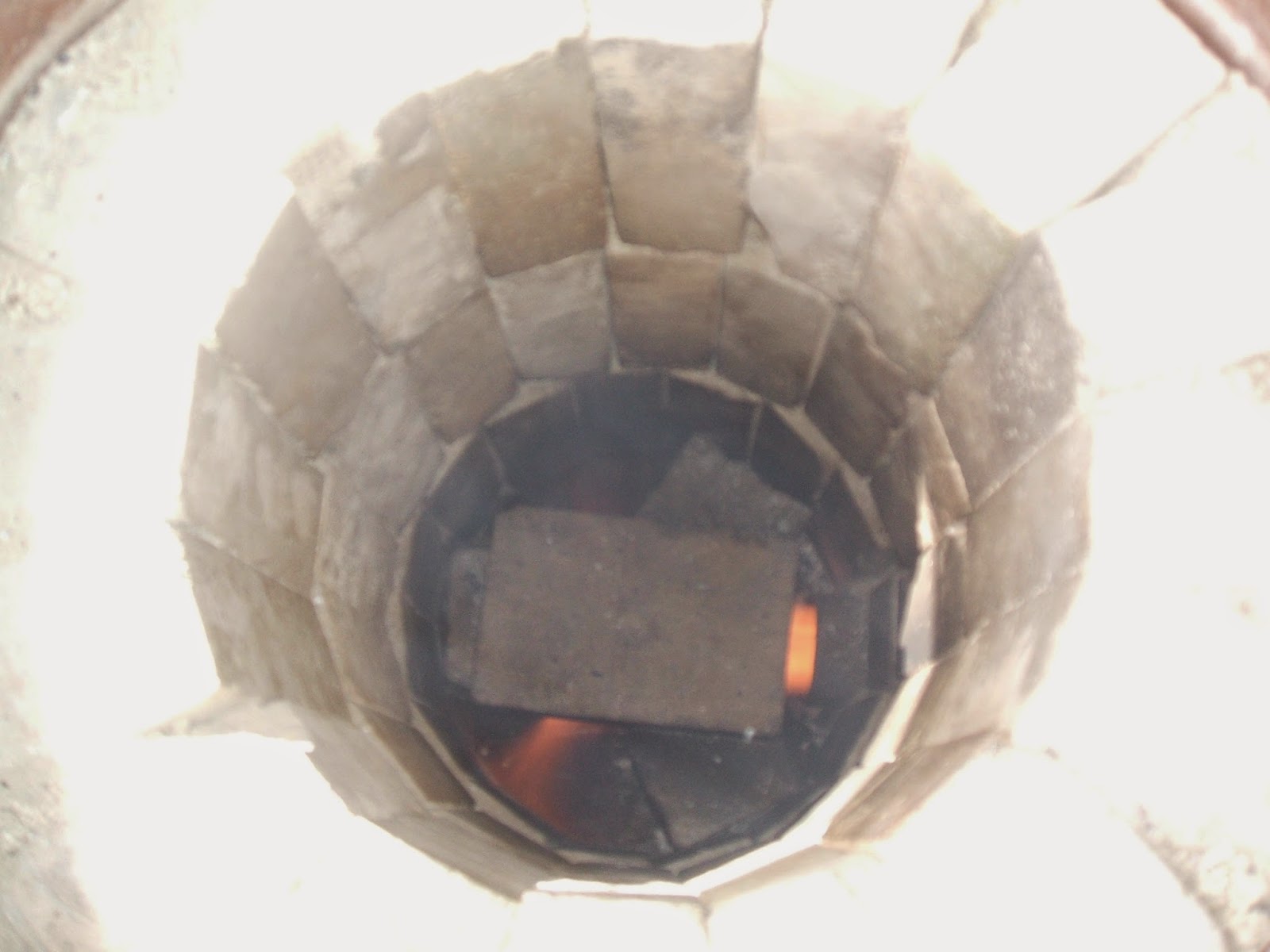 Test firing the 'labyrinth' designed to soften the harshness of flame 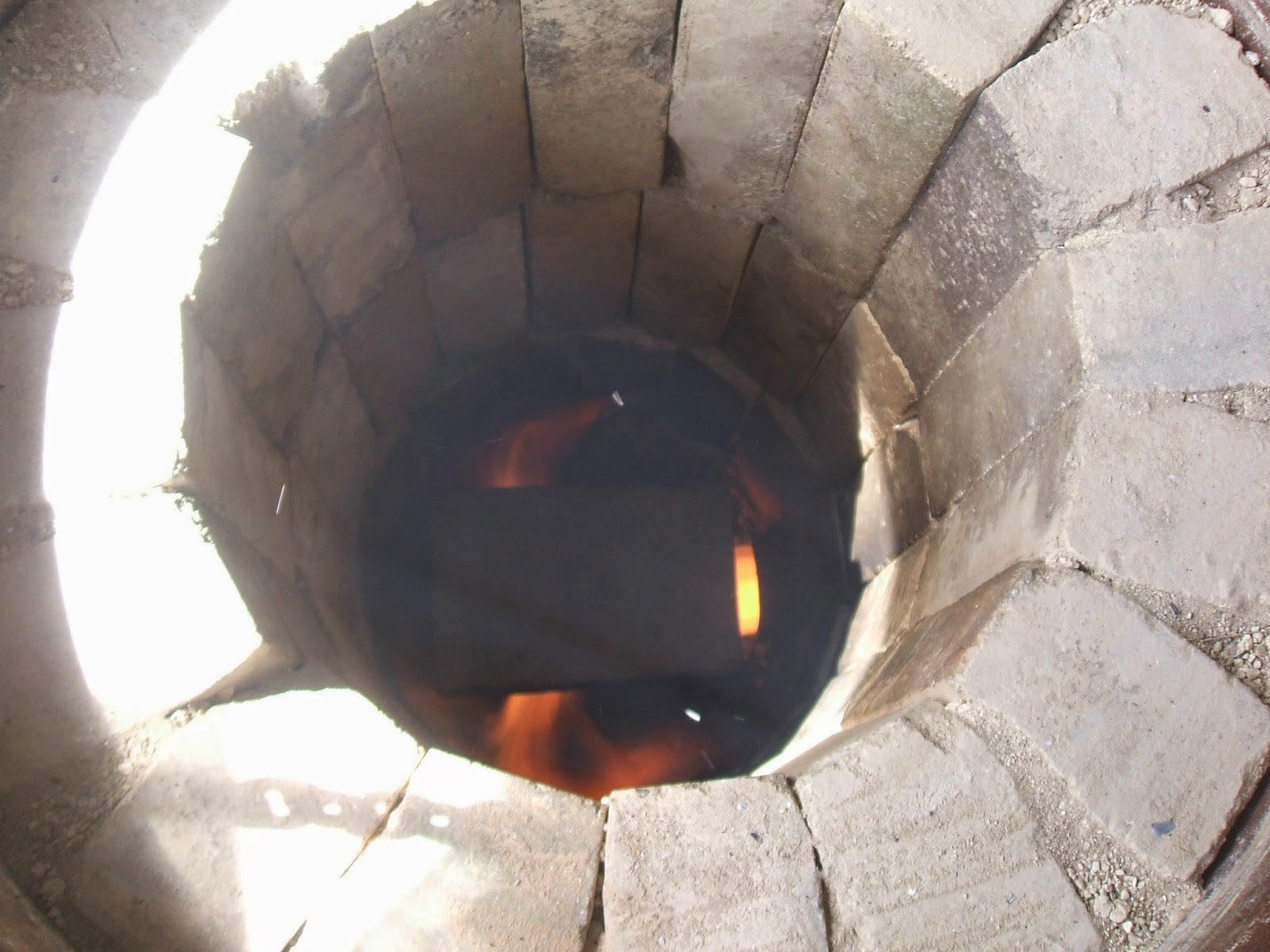 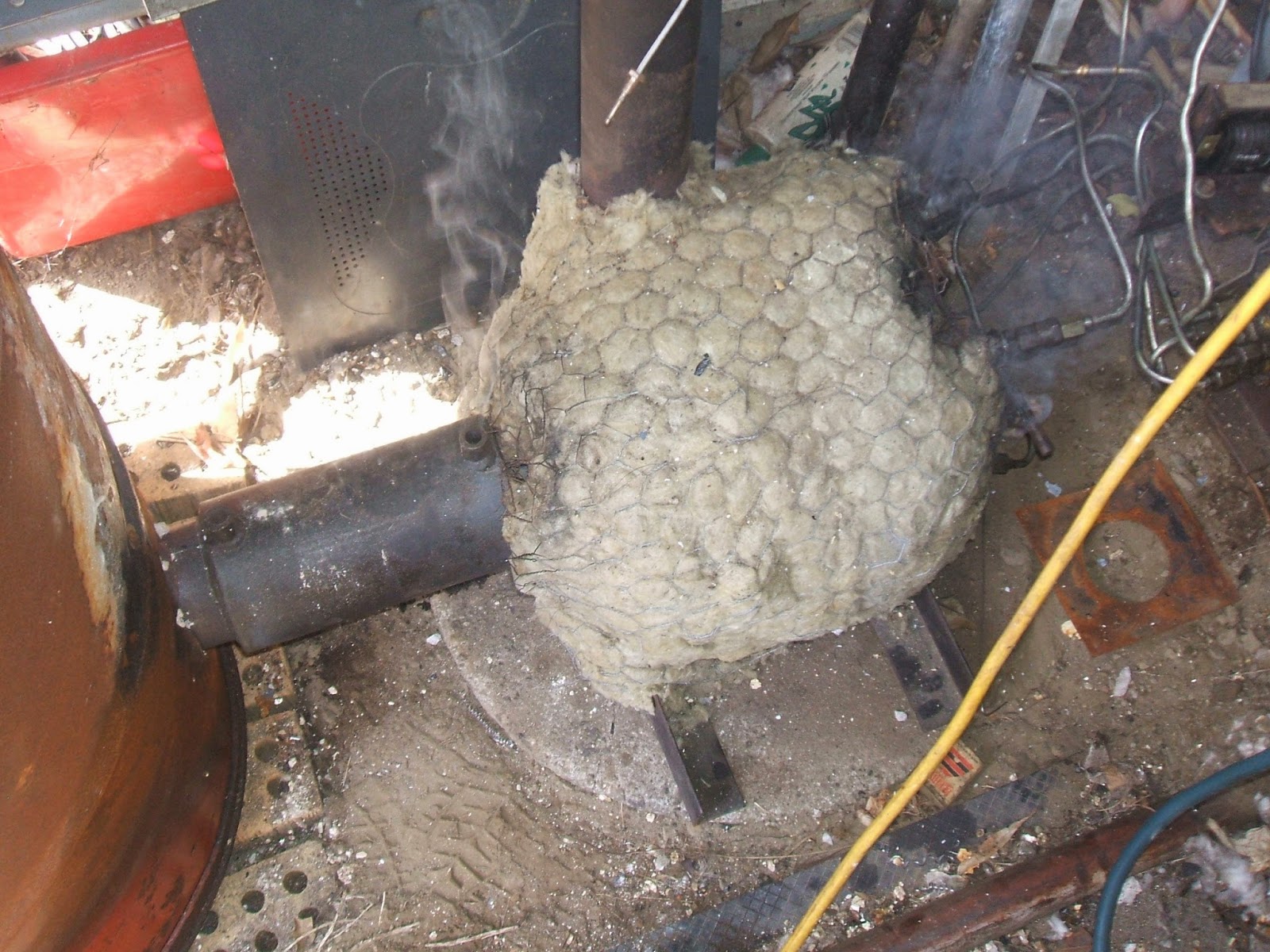 Posted by Excalibur at 10:56 PM No comments:

The retort suffered decay of the heat ducting. It appears as though proper refractory is needed to properly fix the issue. The retort vessel itself appears unaffected. Currently I'm pondering over the future of the plant. One option is to accelerate plans to develop a flash evaporator for converting WMO to diesel. Initial test of crude prototypes were encouraging but far from economic as yet.

The fuel from the retort appears to be forming gum resin. This has been discovered in a product pump, seizing it. Also in a vehicles' filter. According to research, oxidization can create gum so the hunt is on for a remedy. 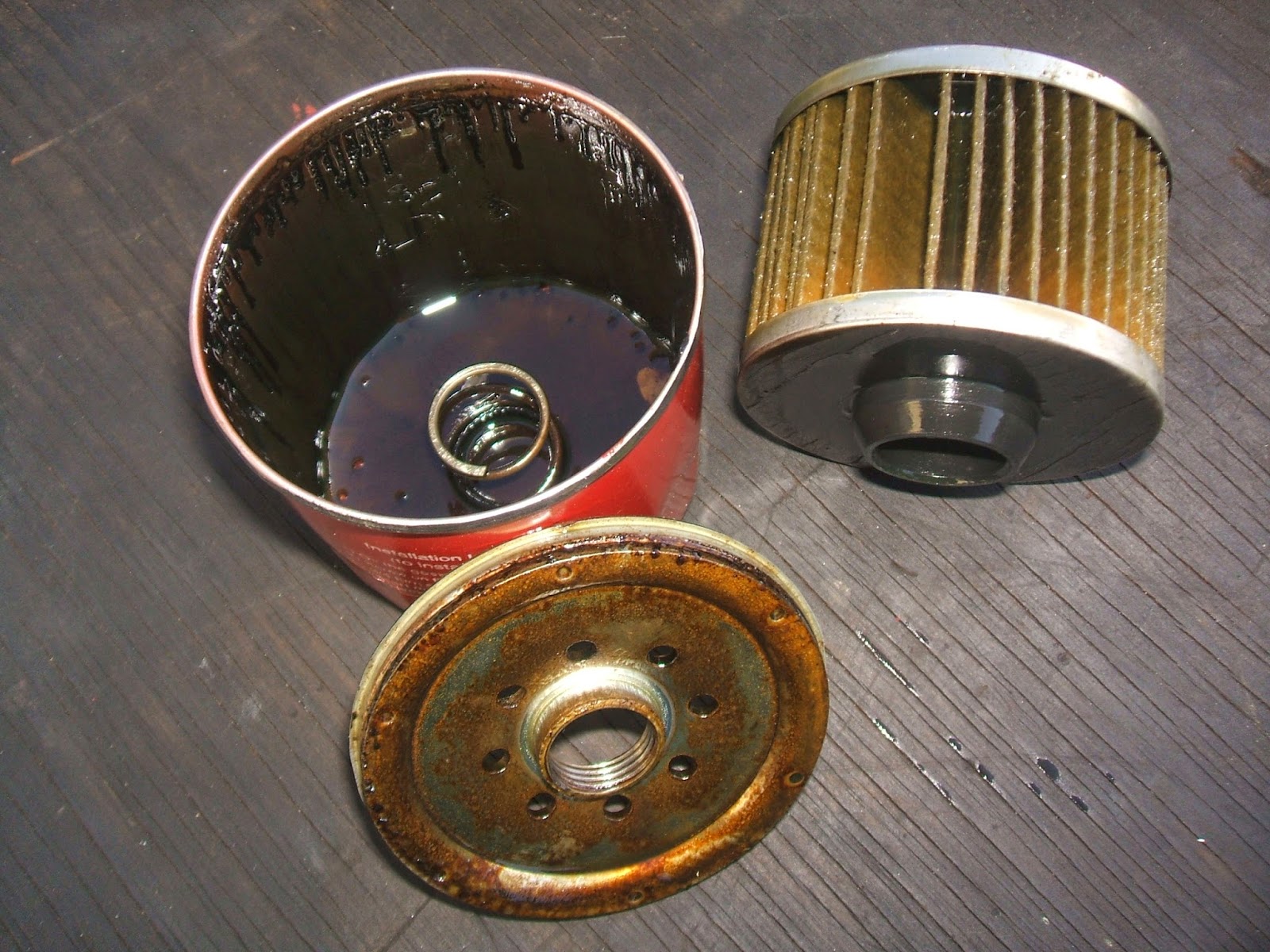 Vehicle filter with gum resin fall out.
Posted by Excalibur at 11:06 PM 2 comments:

Amongst new parts for the Orion retort trialed recently was an extended thermocouple retort probe, Sestos temperature controller and a solenoid for burner control.
The probe showed there is 10°C - 30°C difference between the upper and lower parts of the retort.
The thermocouple LCD's were re-housed in a cabinet recycled from an old PC chassis.
Preheating of the feedstock was by 230v recycled water-heater which was targeting 100°C. Several feedstock pumping speeds were tested. These were obtained by changing the motor pulley sizing.
Boil-over episodes continue to frustrate the distillation process so yet another rethink is underway to solve this issue. The feedstock appears to be a factor causing the boil over and this why the yield was down to 150 liters produced.
One remarkable thing realized was that ambient temperature has a significant effect on the amount of heat that needs to be applied. Midwinter with the chill factor after dark really showed this phenomena up.

Posted by Excalibur at 9:59 PM No comments: 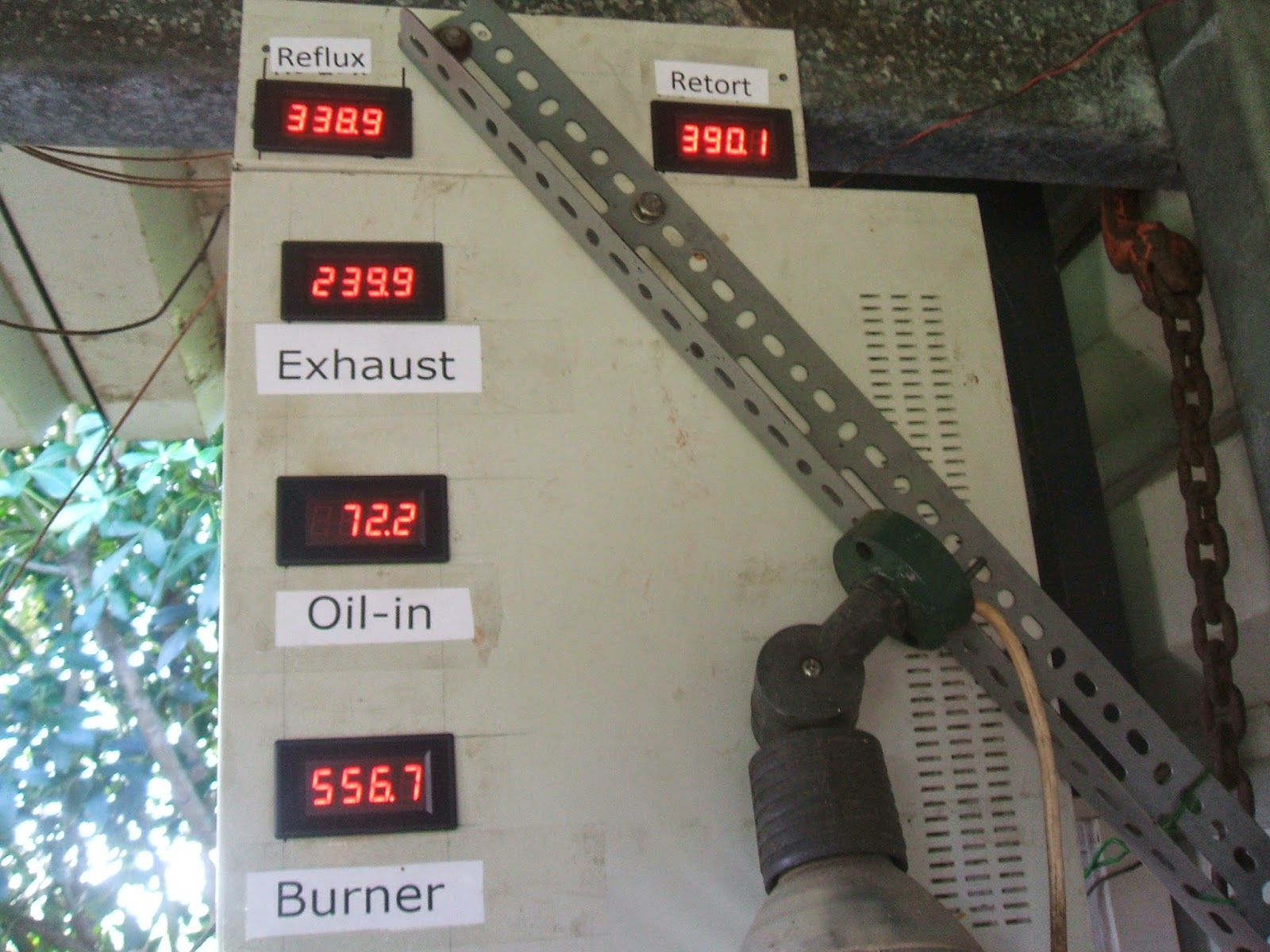 Some new thermocouples were added. The 'Exhaust' recorded up 250°C so will be heat source of the newly proposed preheater heat-exchanger. 'Oil-in' is the temperature at which preheated oil feedstock enters the secondary heating stage, a pipe-in-pipe heat exchanger. The 'Burner' shows the current flame temperature as it exits the turk-burner-head. 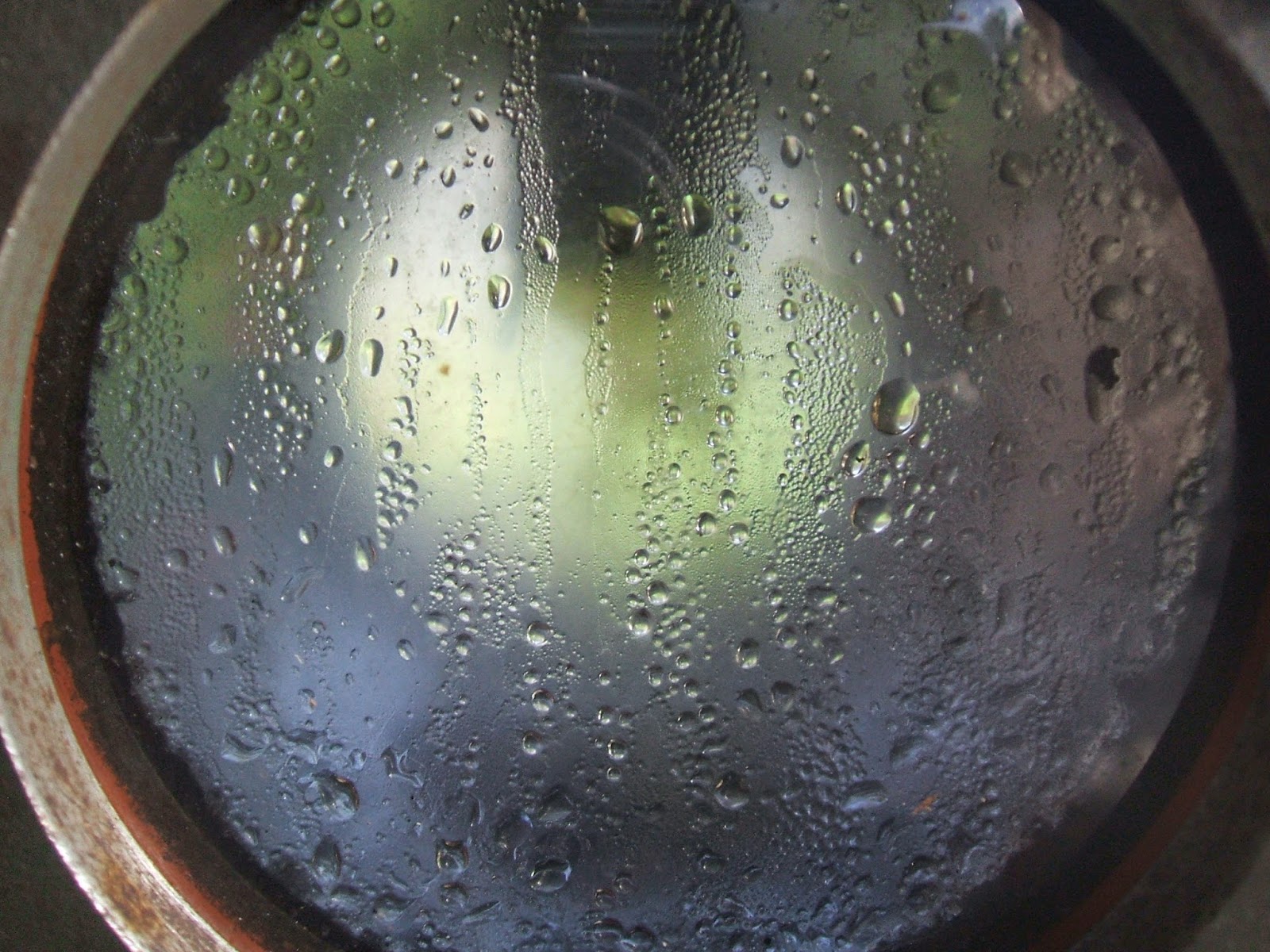 Here the sight glass was showing water droplets. I believe the oil feedstock was wet with a suspended water content. This may have been responsible for the boil-over problems experienced.

This is the feedstock infeed pump which is a simple gear pump commonly used on boats. In order to obtain the speed I wanted, I had to gear it down considerably. I'm far from convinced that this pump is delivering the quantity at which it was tested. It turns quite slow and has to pump 100°C oil so may be suffering because of it. 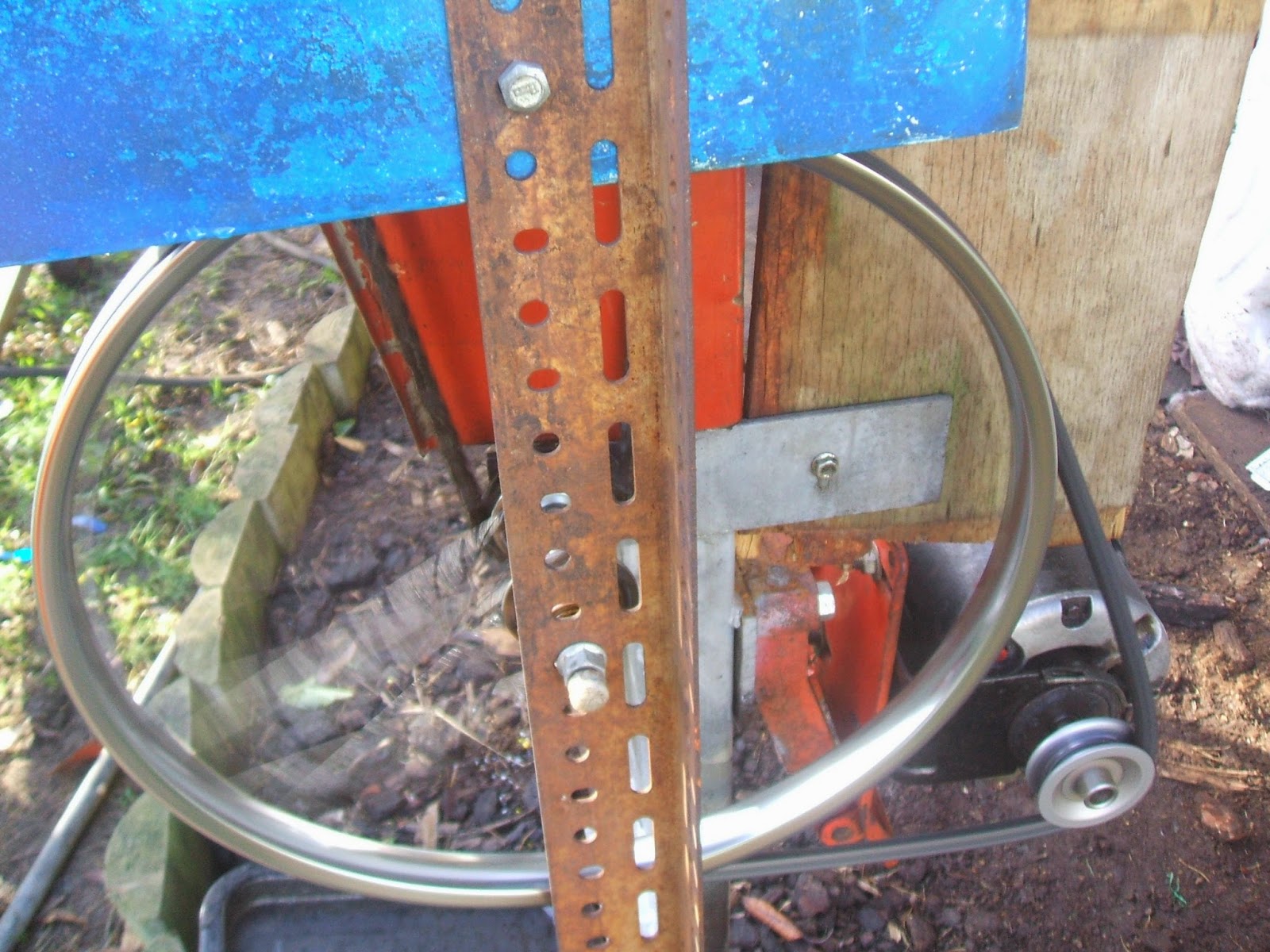 This is the reduction gearing made from a bicycle wheel rim, which drives a set of bicycle sprockets giving the required deep reduction. Theory says the current range of spare motor pulleys allow feedstock rates between 30 and 45 liters per hour. 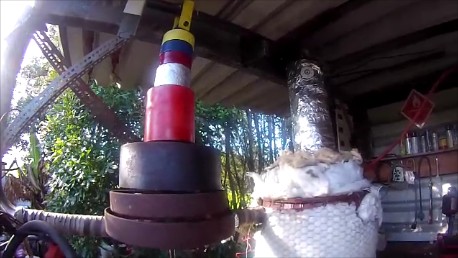 The approx. 40kg of balance scale weights used to determine how much feedstock is inside the 47 liter retort. This is a great help for the operator when using a constant or batch feed pump to deliver fresh feedstock. The weights are recycled cast iron pulleys and flywheels.
Posted by Excalibur at 12:40 AM No comments:

I completed a test run with a preheater designed to raise the temperature of the oil feedstock.
About 180Liters of diesel was made during the day though numerous problems prevented a better result. The feedstock feedpump failed to deliver, the preheater boiled over, the retort over filled were amongst problems encountered.
It's becoming clear that the feedpump should have been mounted lower with respect to the preheater.
At times the pump could not pick up the oil. High oil temperature would have thinned the viscosity and in addition the pump rpm was too slow to make the system reliable.


Also a reliable method of accurately determining retort level urgently needs to be found. This problem has been particularly troublesome and frustrating. The liters per hour could increase by a good margin if this was sorted. In addition, heating energy could be saved.


The bigger gasjar functioned as expected. It is over double capacity.


I have about 180 liters of diesel which is being progressively fed into the up-flow settling tanks.
Therefore I have 3 ~ 4 weeks of fuel. By then I want to be ready with the next round of modifications.


Thanks for viewing my blog
Posted by Excalibur at 7:58 PM No comments:

265 liters was the yield from 13.5 hours of continuous run time for the Orion retort refinery. On a 8°C early morning the heat was started at 7am and concluding after dark at 8:30pm

A 574 liter diesel receiver reservoir was prepared and fitted. Freshly painted in green it was fitted with insulation with the holding temperature aimed at 80 - 100°C. The target was slightly short with max temperature eclipsing only 70°C.

The gasjar overflowed several times so this will be one planned upgrade. It needs enlarging and the contents needs to be "visible-at-a-glance". In addition I want to move it outside and away from the retort shelter.

It is becoming more obvious why the retort will only make 20 liters per hour as a maximum ceiling rate. The ingoing feedstock cools the retort too much resulting in down time when production slows to a trickle.

The newest device, a retort level indicator hasn't worked as well as hoped, so a rethink of its' capability is underway. Knowing where the level is critical for efficient running as too low makes for slow production while too high invites boil-over. (See retort page for details.)

Hydraulic lines replaced old oil feed and heat exchanger hoses. These worked well. A plugged strainer slowed production for a short time till the fault was located. A larger replacement is planned.

The diesels' specific gravity of .848 SG was in line with the target. Picture is of the diesel with the hydrometer floating in a recycled fruit juice container. The diesel is quite dark in color though if occasional boil-over events can be eliminated, this would be beneficial. Other batches have had similar color though perform well after filtering.

Planned upgrades next are revised and enlarged gasjar, burner door seal, anti-boil-over device, additional instrumentation and improved preheating of feedstock.
The next run will be in relatively quick succession as extra fuel is required for the new diesel settling upflow tanks. This setup needs diesel to be left for a month+ to release sub micron particles by gravity.
Posted by Excalibur at 11:00 PM No comments: 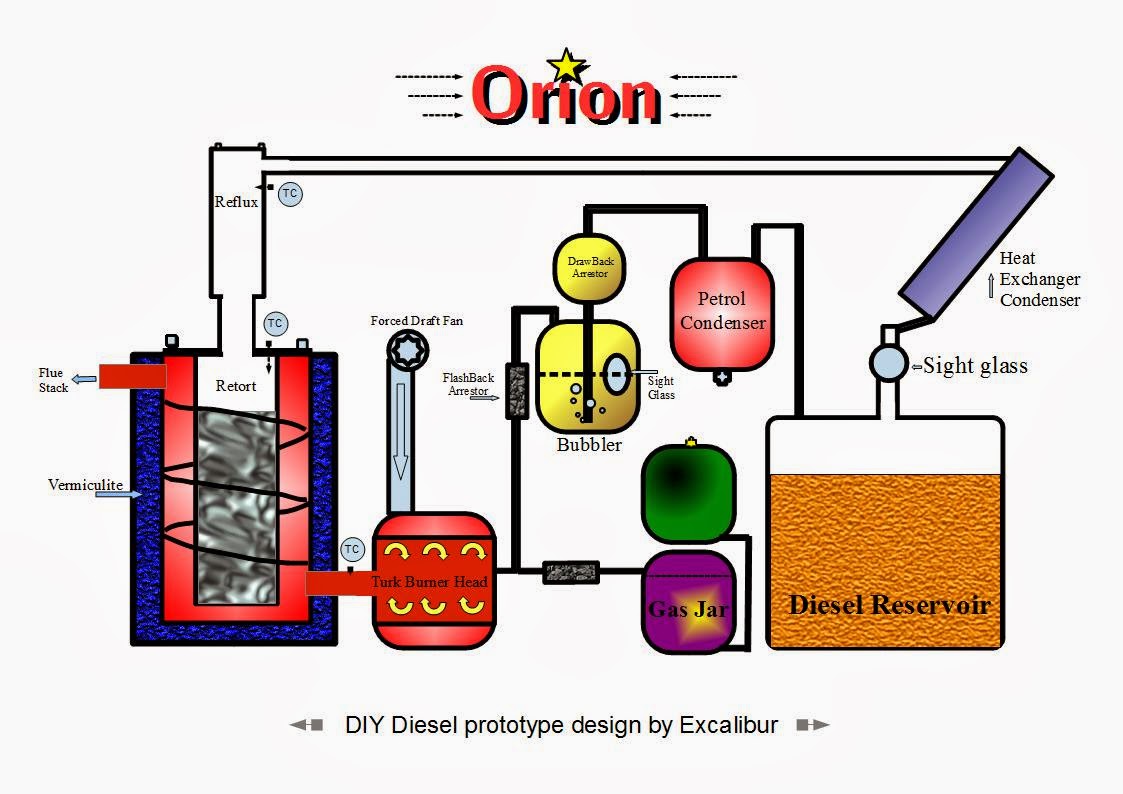 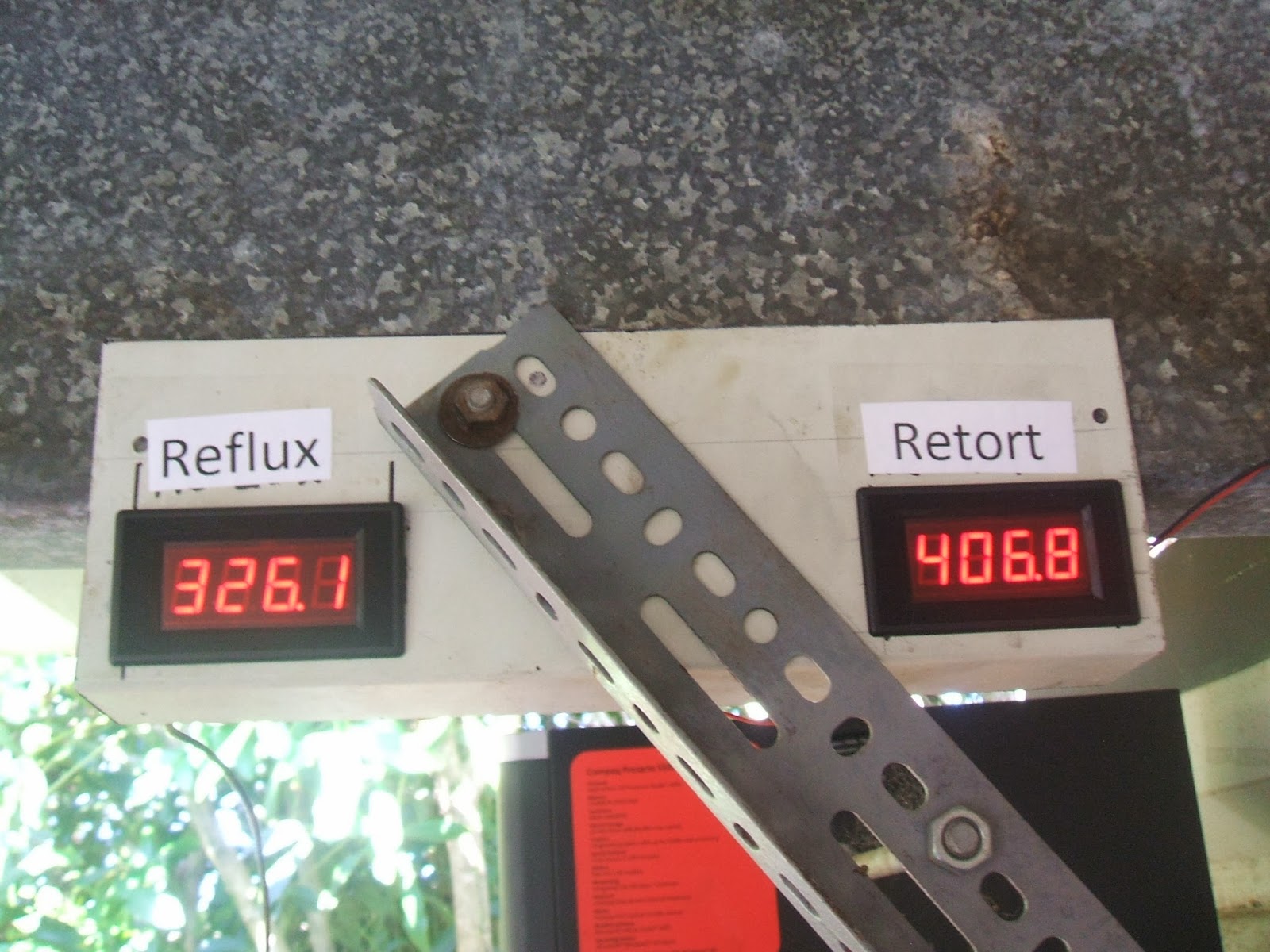 The condenser array temperature readings using 12v powered gauges which are probably PT100.
They read to 150*C max. I aim to have the diesel reading higher than the shown reading to drive of volatile fractions down to the petrol condenser. Because I don't require petrol the shown temperature of little more than ambient may have helped power the turk burner with gases. 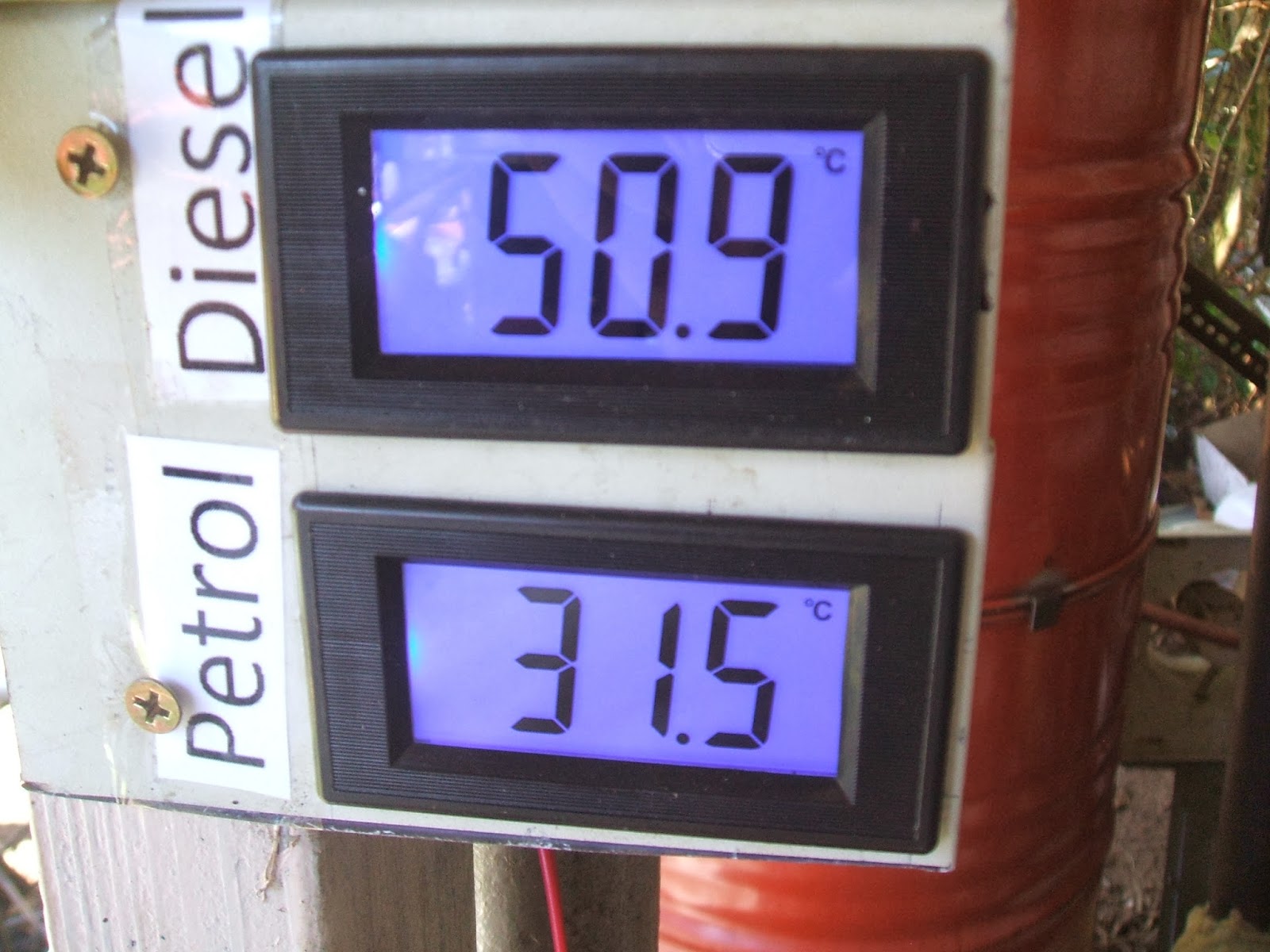 The turk was able to be powered mainly by gases once it was up to temperature. Continuous run in excess of 2 hours gas was nice.
Full speed for the diesel flow was recorded at 1 liter per minute but that rate couldn't be maintained as any incoming feedstock cooled the retort.
Full story shortly as I find time...
Posted by Excalibur at 11:05 AM No comments:

I made a good step forward with efficiency with the latest changes to the Orion retort. The video shows selected footage of diesel production. Nine liters of diesel was used to fire the turk burner head, plus retort generated gases were used as well. At times the gases were enough while other times the turk was used to supplement. The video shows the turk injector pump running, sounding like a tractor while the second part of the clip displays the gases alone doing the heating. The faint eerie howl of the forced draft fan can be heard.
More soon. thanks.
Posted by Excalibur at 6:37 PM No comments: